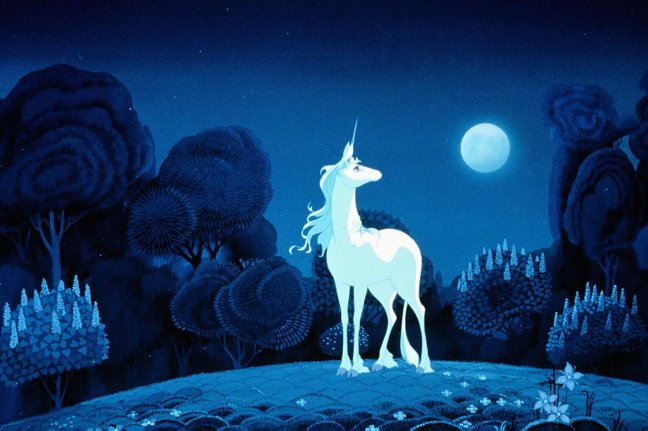 If you were a kid in the 1980s, you probably watched the animated version of The Last Unicorn at some point. Maybe at several points. Maybe over and over again until not only you but also your parents could recite portions of it from memory.

The Last Unicorn was definitely a staple in my childhood home, and I’ve introduced a few uninitiated folks to it over the years. I mean, what’s not to love, right? You’ve got awesome Japanese-esque animation, an amazing voice cast (Christopher Lee, Angela Lansbury, Alan Arkin, Jeff Bridges, Mia Farrow), an unforgettable soundtrack by America… and of course, UNICORNS!

What you may not realize is that the animated movie is actually based on a book by Peter S. Beagle. He was in a dispute with the owners of film for many years over unpaid royalties, but their 2010 settlement opened up all kinds of new opportunities for The Last Unicorn, including a worldwide movie theater tour of the classic film that will continue through the middle of 2016. For the first time in decades, the film is being shown on the big screen—featuring a gorgeous new 2K Digital Cinema print, with Beagle available for audience Q&A, book signing, and other special screening fun. I found out about the tour through the magic of Twitter (I love you, Twitter), and as if by magic, it turned out that The Last Unicorn was coming to my neighborhood the following weekend at San Francisco’s historic Balboa Theatre. I snatched up a couple of tickets and made my way to one of the afternoon showings on December 6, 2014.

The merch table at the screening was pretty fabulous. In addition to DVDs and books, you could buy pieces of an original film reel of the movie, litographs, DVDs, shirts, art prints and much more. I ended up getting a litograph and an art print. If you’re not familiar with litographs.com, it’s a pretty great company that specializes in making art composed of the text of classic books. For example, this is the litograph design for The Last Unicorn: 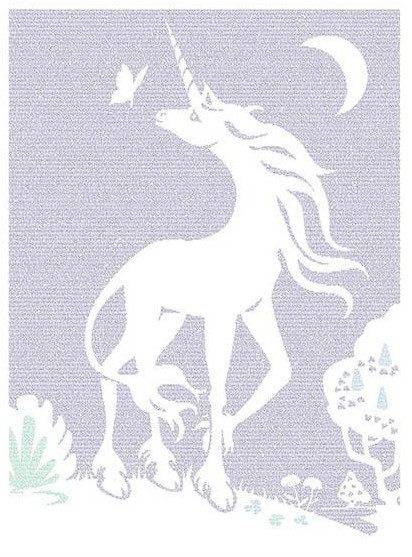 The design itself is lovely, but when you look more closely, you see that it is actually made up of the words from the book–the entire book, actually. For example, here is the upper left-hand corner of the poster:

I would have loved to get both of the first two prints and mat them side by side in a single frame, but since the prints are pretty costly ($100 each, $400 for the set), I limited myself to just the first one, the watercolor of Amalthea and the unicorn. The print will be shipped to me at some point, and I can’t wait to receive it! (If you’re interested in getting any of these, check out the Conlan Press website).

Of course, the best part of the event (besides the movie) was actually getting to meet and talk with Peter Beagle. He was extremely nice and spent a lot of time talking to each person, which made the line move incredibly slowly but was also incredibly sweet. He graciously signed both my litograph and my copy of his book: 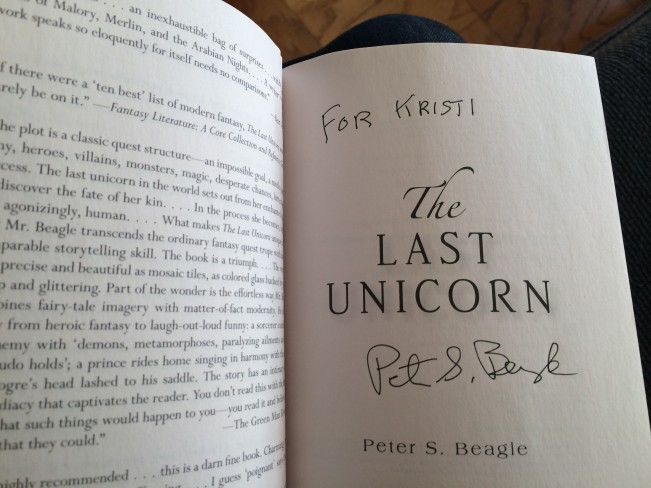 All in all, it was a really fun day. I got some cool movie swag, watched a film I love in a new digitally remastered version, and got to meet some of the people behind it all. The tour is still going strong, and I’d definitely recommend trying to catch it if you are a fan of this classic movie. For the latest information, check out the tour website. They are going to be literally all over the world in the next year and a half–in addition to hitting 42 states, they are also visiting Austria, the Czech Republic, Germany, Switzerland, France, Great Britain, Italy, Ireland, Spain, Mexico, Puerto Rico, South America, Japan, China, the Philippines, New Zealand, and Australia. And this tour has already been on the road for a few years, so you’ve gotta admire their dedication. There is also a Broadway musical in the works, and I’ve heard rumors of a possible live action movie, which we may hear more about later this year.