At the end of the summer, I moved from the heart of Shibuya to a new apartment just north of Shinjuku called Takadanobaba. Although I was a bit sad to leave all of the excitement of living in Shibuya, there have actually been a lot of nice things about living in a somewhat quieter neighborhood. One of my favorites has been my new balcony herb garden.

This new project was inspired by 1) the surprising number of florists in my area, many of whom also sell potted plants, and 2) my cute little window/balcony, which luckily has a sunnier and slightly more interesting view than many apartments that simply face a wall (or worse, look into someone else’s apartment). I briefly tried to grow basil and parsley from seeds when I was living in Shibuya, but the seeds never really took off due to lack of light and overly damp weather (which led to mold). But given the promising conditions in my new place, I thought I’d try again. After wandering and browsing the local shops, I managed to find some decent garden-ready plants, which I promptly re-potted in contained from my local 100-yen shop (similar to a dollar store in the US, but oh so much more useful). My starting lineup was oregano, basil, cilantro, and parsley, as shown in the photograph above, which was taken six weeks ago.

Just three weeks after the photo above, my leafy friends were already off to a good start, with the basil in particular showing a lot of progress (basil, oregano, and cilantro pictured below):

The photograph below shows all four plants on my dining table. I have to bring the little fellows inside from time to time–one of the downsides of being on the top floor is that my balcony is exposed to the elements, and the wind sometimes gets very strong. I worry that it will end up damaging the plants, particularly the cilantro, which is the most flimsy of the four.

Of course, the thing about herbs is that they’re meant to be used. The plants actually benefit from periodic trimming, which encourages new growth. I’ve actually had a bit of a hard time keeping up in this respect, particularly with the basil (whom I’ve grown fond enough to not-so-creatively name Basil, with the British pronunciation). But I used the latter’s prodigious growth as an excuse to cook a basil-themed meal and consequently give him a bit of a haircut, as shown in this before-and-after picture taken just a few days ago: 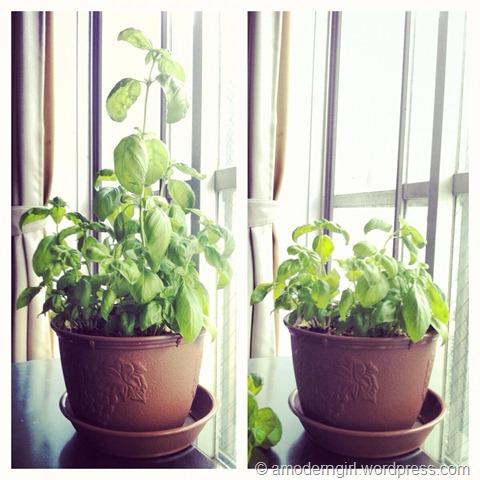 I ended up making mozzarella, cherry tomato, and basil skewers (from the Food Network), a simple salad of mixed herbs, avocado and balsamic vinegar, and pasta with a spicy sun-dried-tomato-roasted-red-pepper-cream-sauce (adapted from Bon Appetit with the addition of a shallot and sauteed chicken). We enjoyed the meal with a very nice bottle of Chardonnay from Ridge Vineyards in Santa Cruz, and my friend also brought some delicious and quite pretty cakes from the Mitsukoshi department store in Nihonbashi for dessert. Overall, it was a very satisfying meal, even more so since I got to use some of my own homegrown herbs.

Of course, not all gardening attempts are a success. My original garden lineup also included a red chili pepper plant that came from the flower show with a pretty pronounced aphid infestation. I knew it was probably a lost cause from the beginning, but the plant was just so pretty (and productive, in terms of numbers of peppers) that I thought I’d give it a try. Despite my efforts to spray the leaves with a soapy-water-and-oil solution, unsurprisingly, the plant only lasted a couple of weeks before being totally crippled by the aphids. Here’s a picture of it just after I brought it home (in memoriam): 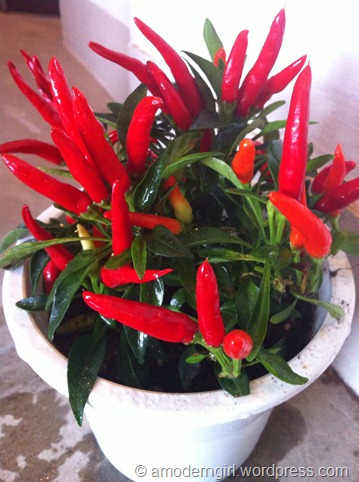 Anyway, my little set of plants has been quite a fun and economical project for the fall. The weather is starting to get colder here, so I’m not sure how they’ll fare into the winter. But it’s been great so far!

← A Day at the Monterey Bay Aquarium
Wordless Wednesday #29: Highlights from Instagram →

9 thoughts on “Adventures in Herb Gardening”