It’s springtime here in Japan, which means that it’s time for one of my favorite pastimes: hanami!

What is hanami, you ask? Well, it’s usually translated as “cherry blossom viewing,” but it’s so much more than that. Hanami is a time for celebrating the end of winter, for eating, drinking, and being merry with friends under the cover of gorgeous pink blossoms. It’s a veritable social institutions here in Japan. Justine over at winfailjapan organized a hanami picnic for the students at my language school last weekend in Tamagawa Park:

At this time of year, the scenery totally changes—it’s amazing how many parks and rivers in Tokyo (and all around the country) are lined with beautiful cherry blossoms that suddenly appear when spring is in the air. 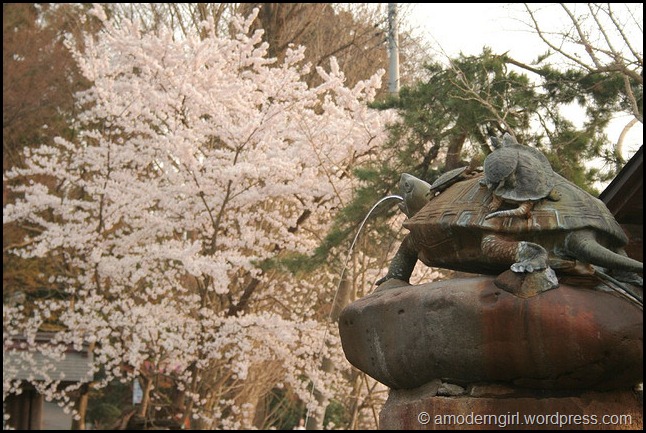 And of course, Japanese people have hanami almost down to a science. As the “sakura front” moves north from Okinawa to Hokkaido, various places track the opening of blossoms and predict when peak viewing season will be. I’m planning a trip up to Aomori in a couple of weeks, and I *should* be just in time for prime hanami time at Hirosaki Castle, according to some reports.

Last year, there was a marked decrease in hanami-related merriment due to the March 11 triple disaster, so it was nice to see things getting back to normal this year. I think this weekend’s rain has pretty much done away with the blossoms in the Tokyo area, but there’s still another month of sakura-viewing left for people further north.

I’m submitting this entry to this month’s J-Festa, “Hanami in Japan.” The deadline is April 22, so you still have time to submit your own post!