The “flashback to China” continues! I spent the majority of my trip in Beijing, but I made one short trip to Xi’an, the one-time capital city of China, the starting point of the northern route of the Silk Road, and the home of the famous Terracotta Army. Xi’an was about a two-hour flight from Beijing, and I have to say that I was very pleasantly surprised by the experience of flying in China. I think that one tends to be somewhat skeptical about taking domestic flights in developing countries, but I would say that the experience was actually more pleasant than flying domestically in the US. The airport security process was very quick and efficient, and the plane appeared to be basically brand new. The service was quite good, and the price was right.

Anyway, we decided to take it easy on our first day. We were staying in an apartment-style hotel called Citadines, very close to the center of downtown Xi’an. (I recommend Citadines highly, by the way—it was safe, clean, and very well located, with plenty of space and a full kitchen for a very reasonable price.) The central part of the city is bound by 12- meter-high walls that date back to 1370 and a dry moat, which is an interesting contrast to the generally modern and developed feeling of the city center. Just a few blocks from our hotel, in the shadow of the Drum Tower, ran the streets of the Muslim Quarter, which has been home to the Chinese Muslims (Hui) for centuries. Muslims have been in Xi’an since at least the 7th century, but some believe that the current community didn’t begin until the Ming Dynasty.

The lively streets were packed with shops and stalls and eateries, as you can see in the two photos above. Everywhere you looked, you could see signs of the interesting blend of cultures—even in simple things like shop signs, which were marked in Chinese, Arabic and Roman scripts:

It was difficult to resist the urge to try everything in sight—but given the somewhat dicey nature of street food and the fact that we were only at the start of our trip, we decided to refrain in favor of trying out some local restaurants that had come highly recommended (which worked out well). But still, it was quite fun to look at all of the stalls and take in the wonderful smells. 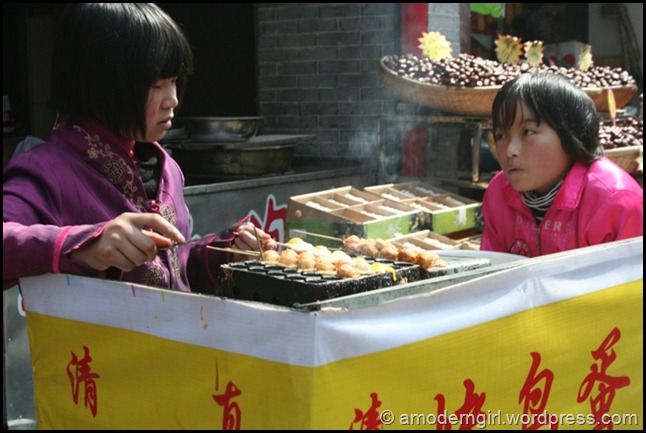 I was particularly tempted by the breads, which looked amazing. (I tried some later in the trip, at Crescent Moon in Beijing, so I can also verify that they tasted amazing. But I really like bread.) Isn’t it pretty, as well?

In addition to all of the skewered meats and dumplings and soups, there was also a large quantity of dried fruit on offer. I think that the ones in the photo below are Chinese dates (jujube). After being in Japan, it was amazing to see so much food on sale for so little money—and the sheer variety was also impressive, which probably makes sense, given the wide variety of climates available for agriculture in China. When I was in Tokyo during the weeks before my trip, for example, I had been searching desperately for a pomegranate for a lamb stew. Having never seen a pomegranate in a Japanese grocery store, I was driven to more desperate measures and almost paid $10 USD to have a pomegranate air mailed to me via Rakuten. But in China, there were pomegranates everywhere for considerably less than that.

Anyway, a stroll around the Muslim Quarter was the perfect way to spend our first afternoon in Xi’an. Unfortunately, we missed seeing the Great Mosque, which was oddly hard to find. It’s also possible that we found it but didn’t recognize it—still not quite sure. Ah well, next time!