Pigging Out on Peking Duck 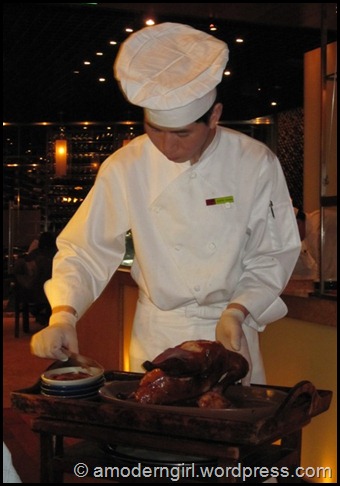 In China, we had two goals in mind. I wanted to see lots of historic buildings and sites, and my friend R wanted to “eat everything,” which turned out to be a pretty good combination of interests. We ate a ton of delicious food on the trip, and unsurprisingly, this included (repeatedly) sampling one of Beijing’s most famous dishes: Peking duck.

I’d never had Peking duck before, so I was in for quite a treat. In case you’re not aware, Peking duck is essentially a roast duck, but it is particularly prized for thin, crispy skin. Which contrary to expectations, is not very fatty at all, if it’s prepared properly—it’s just amazingly yummy crispy goodness. Preparing it “properly” can be quite involved of course, beginning with the way the ducks are raised. Before they cook the ducks, air is pumped into the skin to separate the skin from the fat, then the duck is soaked in boiling water before being hung to dry, glazed, and rinsed again. After being hung for about 24 hours, the duck is then roasted in a special oven until it turns a shiny brown. 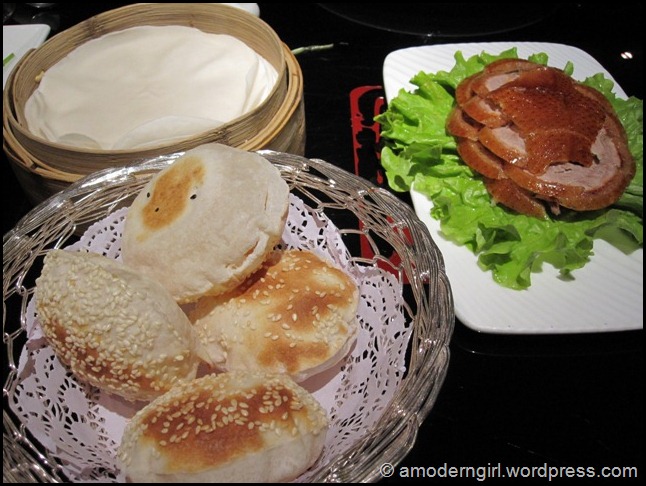 The actual experience of going out for Peking duck was also a lot of fun. We went to three different places, two higher-end (Dadong and Made in China) and one fairly inexpensive local place whose name I don’t recall. At Dadong, you walked in to see an open kitchen where they were roasting ducks, with other headless ones hanging from hooks waiting for the brick ovens. At both Dadong and Made in China, duck was cut up in front of us in an incredibly deft manner (as seen in the very first photo in this post) and served on a variety of small platters. The duck was typically wrapped up within pancakes or light bread rolls (as seen above) and served with a variety of accoutrements including spring onions, hoisin sauce, etc. (as seen below). My favorite thing was actually taking the skin of the duck and dipping in in the provided sugar (top right in the photo below). The result was an amazing combination of savory and sweet wrapped in the smoothest texture imaginable—the skin literally melted in your mouth. So delicious.

The whole duck was served, which actually didn’t amount to all that much meat. We often split one duck between 3-4 people and ordered a number of other dishes to supplement, a wide variety of which were typically available. (I also ended up trying donkey for the first time as a side dish—it was very tasty, and somewhat like really lean beef, served chilled.)  Near the end of the meal, they often brought a soup made of the duck, which really gave you the feeling that you were using every bit of the animal available. (Although presumably the soup wasn’t made with your duck, since the stock probably takes longer to cook. But still.)

Dadong ended up being our favorite restaurant of the trip, in case you were wondering. We thought the duck there was definitely the best of the three, and the overall dining experience was very pleasant. They even seem to rather transcend being a duck restaurant, since the other dishes were quite good as well.

So, bottom line: if you go to Beijing, definitely eat some Peking duck!

Photo Note: The first picture above was taken at Made in China. The other two shots were taking at Dadong.

12 thoughts on “Pigging Out on Peking Duck”